Toyota is an automaker that has often been criticized for being a slow mover in the Indian auto market. However, this year Toyota is on a roll, as it kicked off 2022 with big launches like the world-renowned Hilux pickup truck and the all-new Baleno sedan-based Glanza. It even expanded the Fortuner’s lineup with the new top-of-the-line GR Sport variant. Now, Toyota is gearing up to launch its next big offering in India, the all-new Innova. We got our hands on a few possible design renders based on test mules spied on Indian roads.

Also read: 10 DC Design cars and how they look in the REAL world: Maruti Swift to Mahindra XUV500

The all-new, third-gen Innova has been seen testing in a fully camouflaged avatar on Indian roads a few times. Based on the few obvious design details of the test mules, a digital artist, whose Instagram account is named ‘indra_fathan‘, uploaded some design renders. These possible digital sketches give us a hint at what Toyota Innova’s next-gen model will look like. 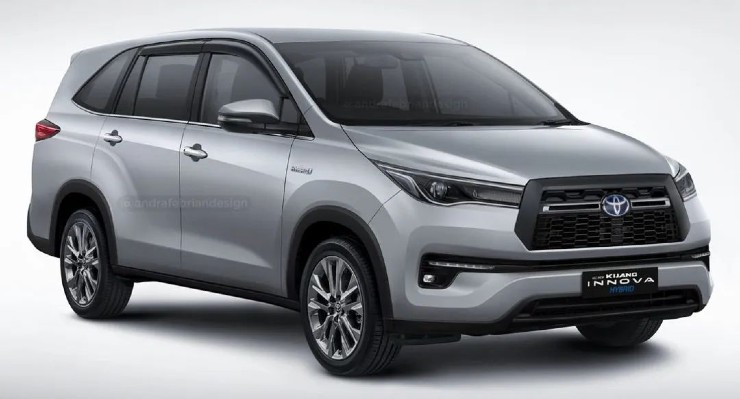 Also read: 10 DC Design cars and how they look in the REAL world: Maruti Swift to Mahindra XUV500

From the first rendering, the new Toyota Innova here features a relatively radical design, which makes it longer and more avant-garde than the current model. Up front, this version of the Innova features a hexagonal grille with a thick, full-width chrome slat in the upper half. The headlights here look sleeker and somehow mimic the design of the Fortuner’s headlights.

The revised fog light housings, which closely resemble those of the Kia Seltos, are joined by a black band. It also gets a silver skid plate on the bottom of the front bumper. Another design highlight of this design rendering of the Toyota Innova is the triangular rear quarter glass, which has been confirmed in test mules spied on Indian roads.

In the second design render, the new-generation Toyota Innova looks a lot like the current iteration of the MPV, with some subtle tweaks to the side profile. It gets the same trapezoidal grille as the current model, but with a new blacked-out border. The design of the headlight housings resembles the current model, but they are longer and receive Fortuner-type inserts for the projectors. The front bumper has a long engulfing strip of daytime running LEDs on the sides, much like that of the Jeep Compass. This model also gets the same triangular rear quarter glass as seen in the first render and recently spied test mules.

Toyota has already indicated that the new Innova will be slightly larger and more upscale than the current second-generation model, known as the Innova Crysta. The third-generation model could also get a new suffix replacing the “Crysta” and will launch globally in the second half of 2023.